By Z. (Originally published May 24, 2016 on Gatestone Institute. Re-printed with permission.) 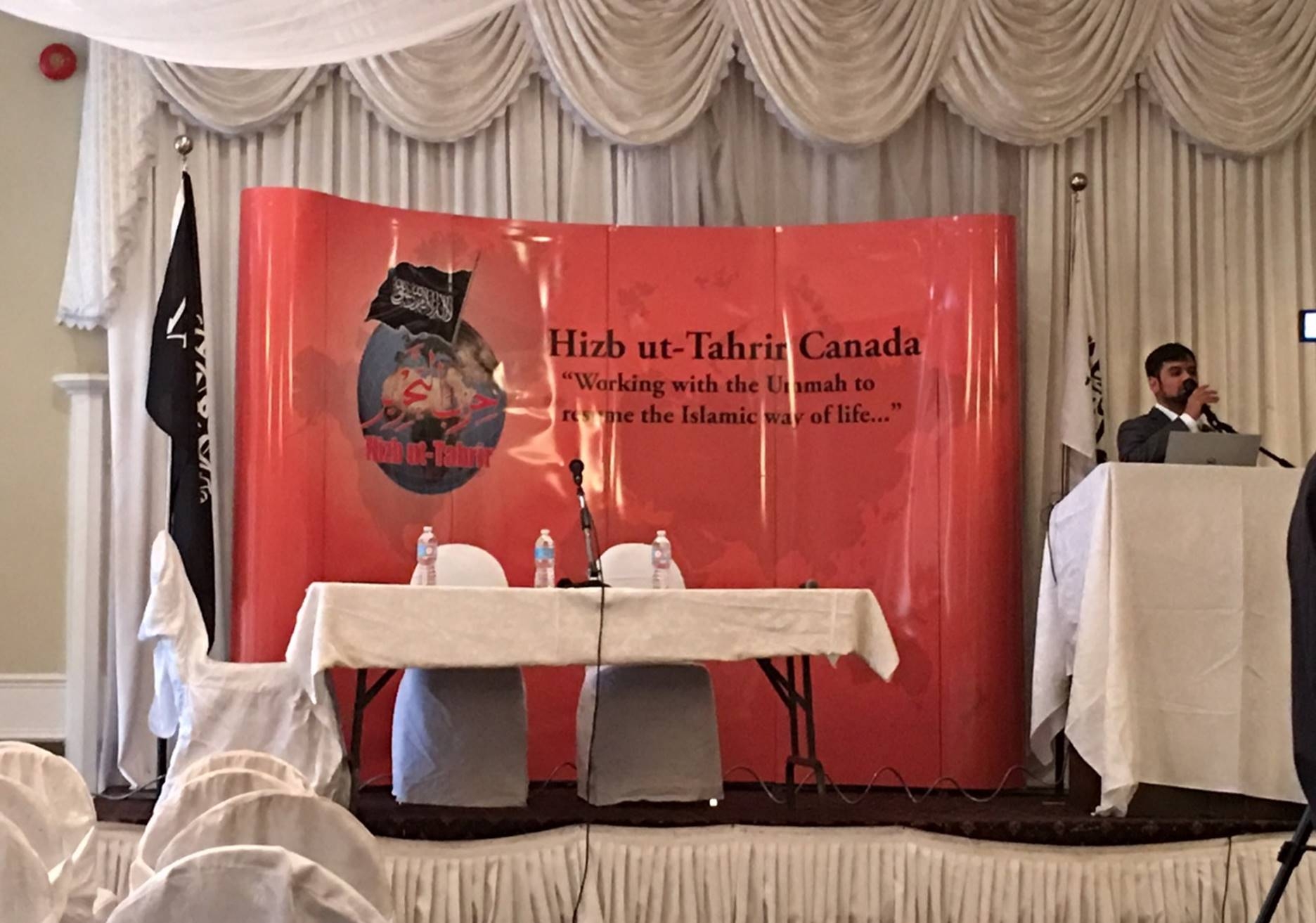 The half-full banquet hall, divided into the men’s side and the women’s side, admitted about 100 attendees. A black flag with white script was on display, on both the screen and on the podium. “Why,” I said to the woman next to me, “is this flag there? Is that not the ISIS flag?” The woman, later identified as Naeema, said it was not, and called her son, one of the organizers, to address the question. It seemed difficult for him, too; he went off to look for someone else more knowledgeable to the help with the problem. Naeema explained that the writing was different. “I can read Arabic,” I said. No one could be found to answer the question.

As the event started late, Naeema began a conversation. We talked about our origins and how long we had been in Canada. She said she had been here 40 years, so I asked about the disconnect between enjoying 40 years of democracy, yet trying to end it. I mentioned a book published by Hizb-ut-Tahrir:

“Democracy is Infidelity: its use, application and promotion are prohibited.”

Naeema said she was not qualified to debate the topic, but that democracy had done nothing good for people, so she and other believers would follow the rule of Allah. Reflecting on the Muslim Brotherhood’s year in power in Egypt, I asked if she were prepared to have a dictator claim to be Allah’s spokesman even if he abused the power. She said she had never thought about it like that, but, again, that she was not qualified to debate the topic. As the conference began, the conversation stopped. 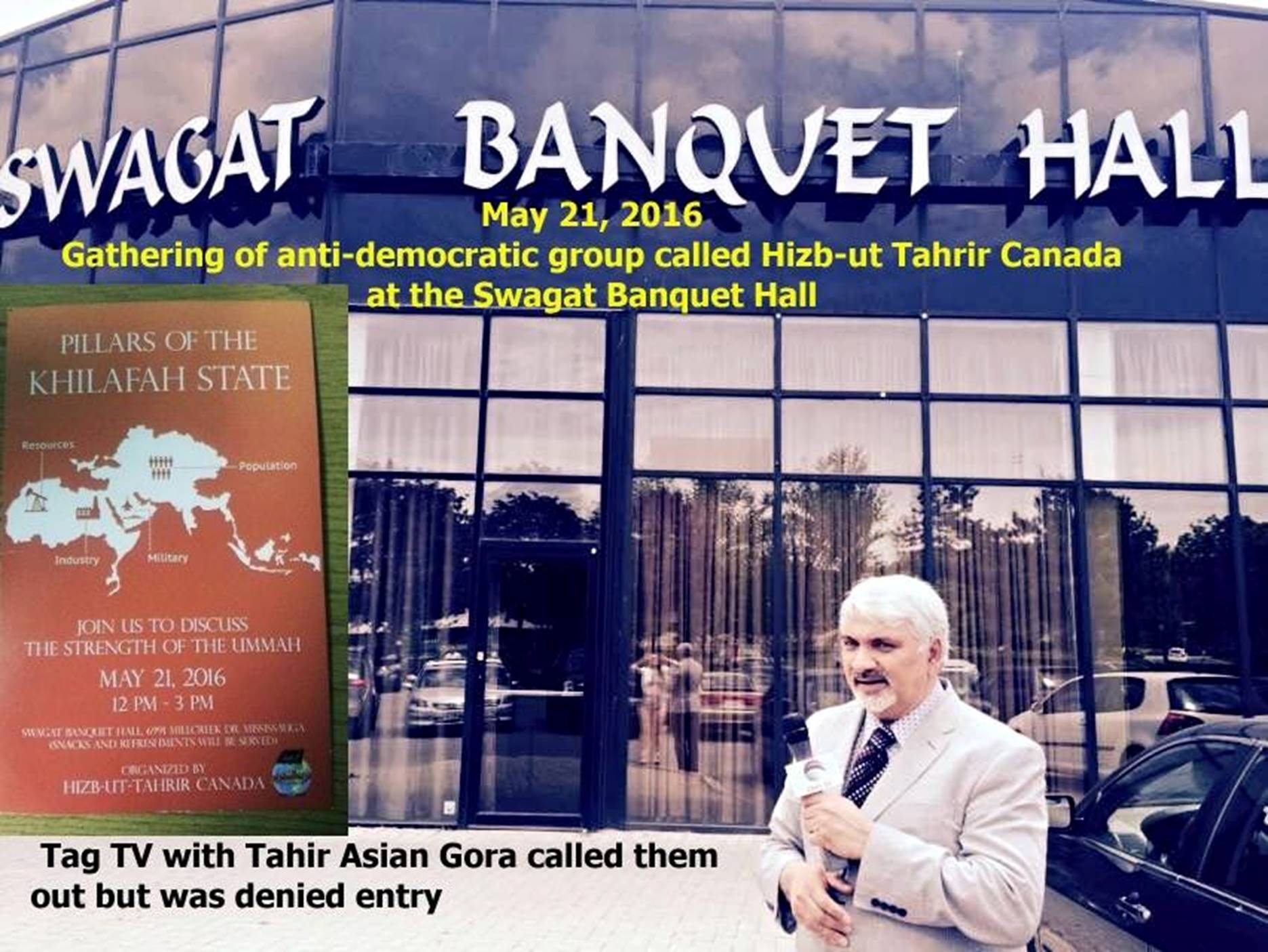 The first speaker was Brother Mostafa, of Arabic roots. Mostafa started by calling nationalism and sectarian conflict the main reasons for division in the Ummah (Islamic nation). He reminded Muslims that they are obligated to implement Allah’s demands that fulfill the Islamic State. It is “not permissible for us to choose, ” he said. He cited the verse:

Mostafa then focused on two pillars for advancing the Islamic State:

To illustrate the point, he referred to the prophet’s sira (life) and cited two examples:

The first was a comparison between the Pledges of Aqabah 1 and 2. In the first, the prophet focused on seeking moral support from the tribes which he called to Islam. In the second, he sought their pledge for militant defense. This second pledge, Mostafa said, represented the foundation of the Islamic State.

His next example was an illustration of the right choice of allies. He cited the prophet’s negotiations with a tribe, the Banou-Shayban. When asked how strong they were, the Banou-Shayban had replied: “We are 1000 men who take weapons of war as our toys, and we care for our horses more than we care for our children.” This reply, it seems, enabled them to win the contract.

As Mostafa spoke, his teenage daughter proudly but quietly cheered him; her younger sisters played with glitter and coloring books. 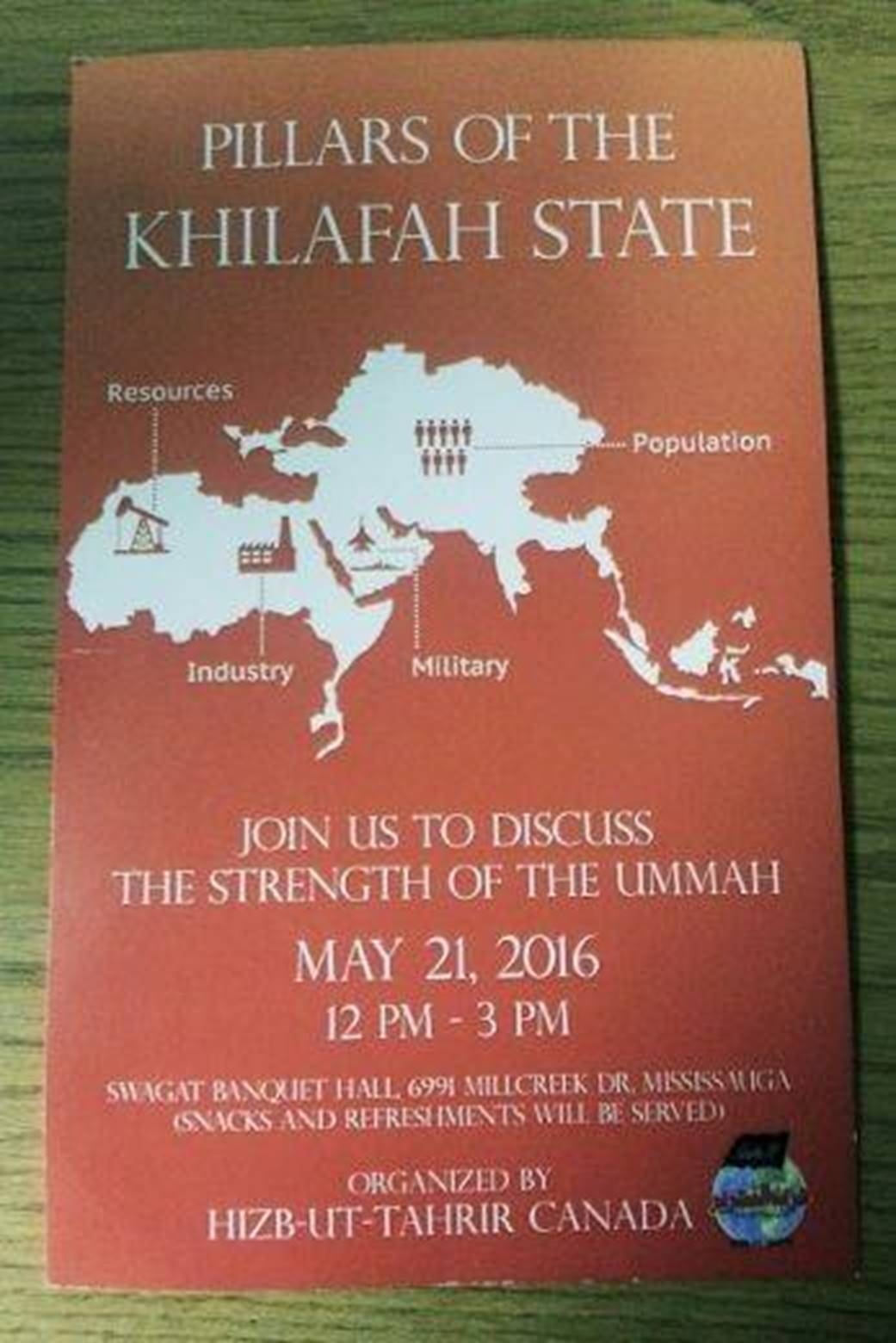 The next speaker was brother Bilal, of Asian origin. Bilal’s message focused on how to make the Ummah powerful and independent. He summarized the requirements: a capable military, economic engines, natural resources, and trained and dedicated people. A short video was presented to demonstrate these points. They included the collective oil and natural gas production capacities of the Muslim world, the human capital needed to mine and process these resources, the military power required to protect both natural and human resources, and the types of weapons needed to make this military effective.

Everyone waved the black flags with the white script.